Nicki Minaj and Drake reveals gender of their newborn baby

Cardi B speaks out after accidentally posting topless photo

Cardi B celebrates her birthday with Reebok footwear collection

There’s no better social butterfly in Bollywood than Karan Johar and so, it’s not a surprise that during this lockdown the director/producer has been a fixture on social media.

At this point you are probably aware of his ongoing series of sorts, titled #LockdownWithTheJohars, featuring his twins Roohi and Yash, unless you’re literally under a lockdown, under a rock somewhere.

From raiding his eccentric closet to sharing witty liners at hi-tea with their dad, the twins have easily become Bollywood’s latest fix of entertainment and why not? They have the best things to say – like how Yash feels his dad’s films are not all that!

In a recent post on Karan’s Twitter, he asks his little tot Yash whether he wants to watch ‘dadda’s’ films with him, including Kuch Kuch Hota Hai. Yash replies hilariously, “No, they are very boring,” leaving Karan in fits of laughter and asking him why.

Yash proceeds to ignore his dad’s query and walks away, at which Karan quips, “He’s walked away like the critics.”

The video left Twitter in laughter at Karan’s light-hearted take on his own critique with scores of industry peers also commenting on how cute his little ones are. 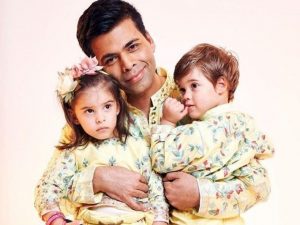 This isn’t the first time that Yash and Roohi have left their father in either fits of laughter or utterly offended, playfully of course.

In another video posted on Karan’s Instagram, the duo seem to not be able to handle their father’s singing. Sitting over hi-tea, Roohi asks him to stop ‘making noise’ to which Karan replies, “But I was singing a song, should I not sing?” Just then, Yash adds, “No, we don’t like it,” which makes Karan break out in laughter.

So ever since I can remember I have loved singing! Am so glad to know I have a loving audience …..#lockdownwiththejohars

In yet another one, the duo is seen playing around in his closet, wearing one of his eccentric glasses. When Karan asks them what they think they look like, Yash quips, “Stupid!”

Glass game is NOT on!! So I have been told! #lockdownwiththejohars #toodles